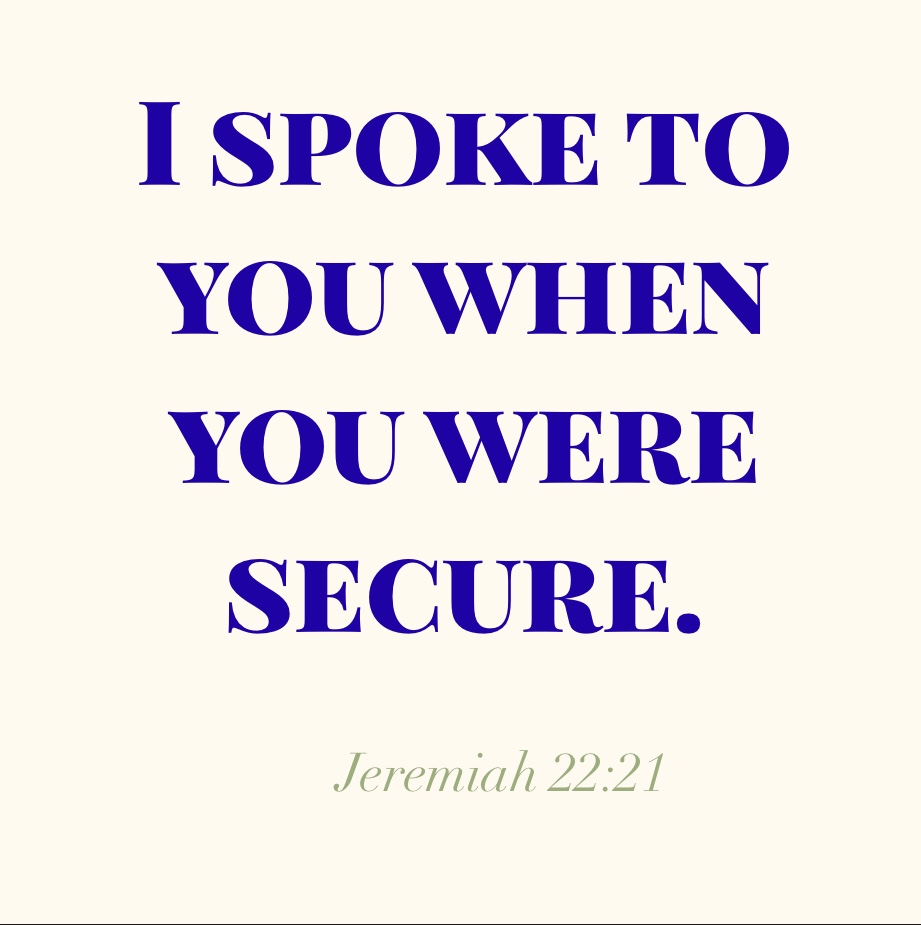 Trouble doesn’t come unexpectedly. God, Who knows the beginning and the end, knows when trouble will come and He will not leave His people clueless or defenseless. He warns us ahead of time, speaking to us and instructing us. It is up to us if we will listen, even in our security.

“I spoke to you when you were secure. You said, “I will not listen.” This has been your way since youth; indeed, you have never listened to me.” (Jeremiah 22:21 CSB)

God warned His people of trouble before trouble ever came. He told His people what to do to avoid trouble, but they did not take His warnings to heart. They felt secure in their own life and did not listen or remember His warnings until it was too late.

Jeremiah is prophesying here of the Babylonian take-over. From the beginning of Jeremiah’s “career” as a prophet, God warned His people of the coming destruction if they did not change the path of their life. Whenever He made a covenant with the kings of His people, He always told them that if they were faithful to Him and brought justice and mercy, traits of His own character, then all would be well and their family would rule for generations. He warned His own people when He brought them out of Egypt what would happen if they followed the gods of the nations surrounding them.

Yet the people did not listen. When Moses was on the mountain, the Israelites made a golden calf and began worshipping it. When they were settled in the promised land, they eventually began following the ways of the nations around them, worshipping the false gods of those nations. Once that happened, sin and corruption became deeply rooted in the people, and not just the common people, but the kings and the other leaders, too. True justice and mercy were lost. When God sent Jeremiah to warn the people of the coming destruction, they would not listen to him. They mocked Jeremiah and even plotted together to kill him, all because he spoke of their sin and the need for them to repent. The people didn’t believe God’s warnings until the prophesied army amassed and Judah fell.

Jesus spoke His warnings to the disciples while they were still secure. Jesus had not been arrested or put on the cross, the persecution of the church was the farthest thing from their own minds, but Jesus still told them so they could prepare.

The disciples were asking about the signs of the end times, but there were also many times when Jesus spoke of the persecution that would follow them because they followed Him. When He spoke of persecution, maybe the disciples didn’t fully understand because to them, Jesus’ whole mission as the Messiah was to free them from the oppression of conquering nations. Jesus couldn’t fail, and since He couldn’t fail, they couldn’t fail. They would be revered and lifted into positions of power because of their association with Him. They didn’t realize until later that Jesus’ mission was more than an earthly freedom, but a spiritual one. What Jesus offered upset many because the He revealed the truth of the people’s heart and spirit, and just as they did with all the other prophets and people sent by God, they persecuted the church.

We may read these words now and maybe we think this is a time past, but God is still speaking them to us in our own security. We must listen and turn to God in repentance and preparation for the times when our only security is the refuge of God.

I know that there are brothers and sisters all around the world currently being persecuted because of their faith in our Savior. There are those who meet in secret because it is against the law to gather in the name of Jesus. For those who live under persecution for their faith in Christ, I wish to remind you of the words Jesus spoke as He warned His followers of persecution:

“You will stand before governors and kings because of Me, as a witness to them. And it is necessary that the gospel be preached to all nations. So when they arrest you and hand you over, don’t worry beforehand what you will say, but say whatever is given to you at that time, for it isn’t you speaking, but the Holy Spirit…You will be hated by everyone because of My Name, but the one who endures to the end will be saved.” (Mark 13:9-13)

We may be persecuted, but even in our persecution we are witnesses. We will stand before the very people who persecute us and speak the words of Heaven to them. If we hold onto Jesus, cleaving to Him above all else, then the end for us will be great, no matter the end.

One thought on “While You Were Secure.”