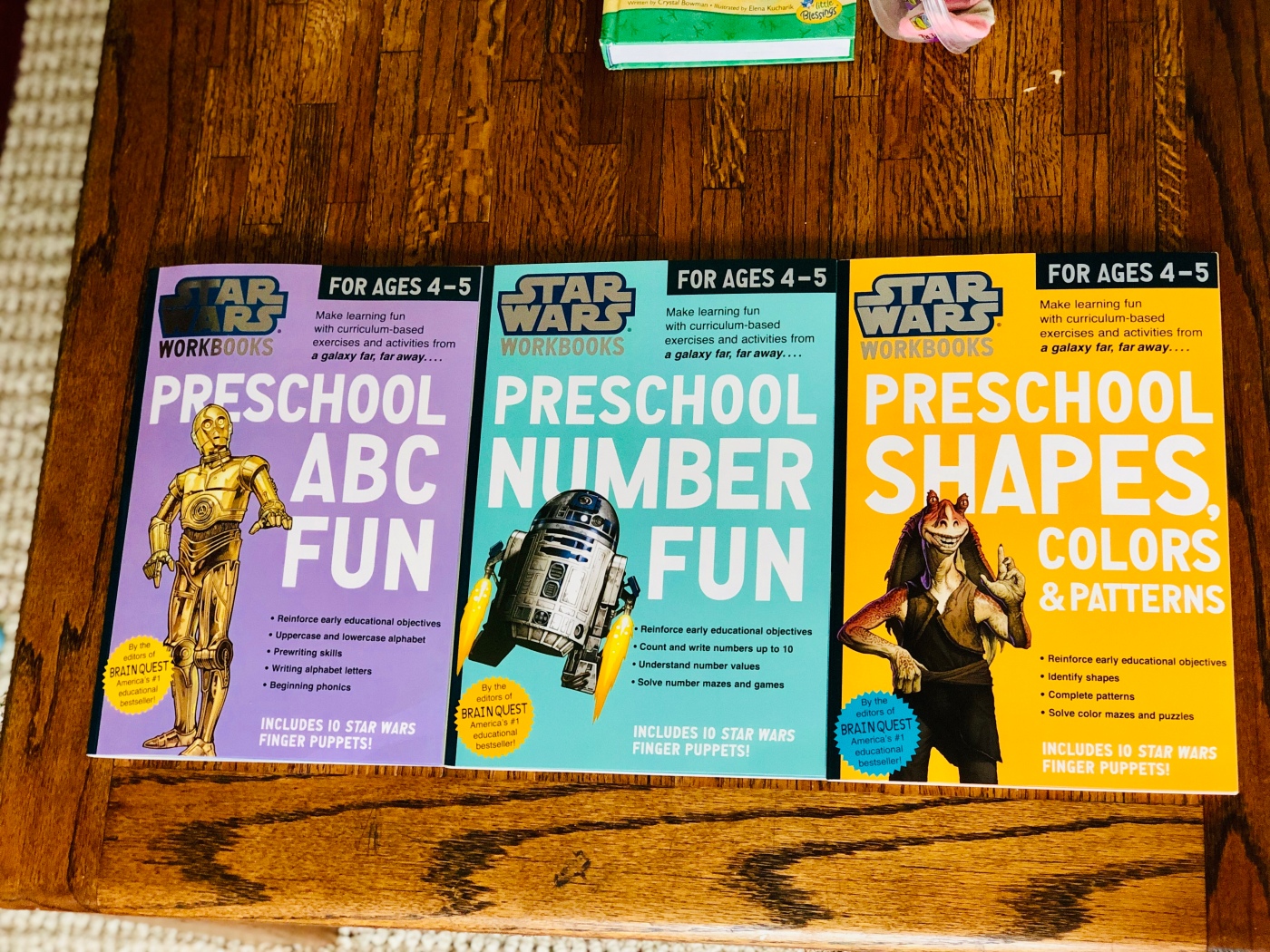 Good morning! Or whatever time it is as you read this. I hope you are having a good Tuesday. Two weeks ago we made the decision to officially bring Isbe in on the Homeschool game, even though she’s still pretty young. We bought her her own homeschooling books that match Ade’s and now she begs us every day to do school.

I have been homeschooling Ade for the last year and every day, Isbe will grab her markers and a coloring page to do her own “school”. Two weeks ago she wondered where her school books were. I, of course, asked if she wanted her own school books and she answered in the affirmative. This was after she came up to us and said, “That’s A,” as she pointed to the letter A. So yeah, I was convinced.

I guess I could’ve looked at Target or Walmart and bought their brand of learning books, but that’s not what we did. Along with Ade’s complete curriculum workbook, we have also bought him some Star Wars workbooks and I’ve been impressed with them. Since Isbe loves Star Wars just as much, we bought her the Preschool level ones. I had originally planned to only get her the ABC Fun one, but when the hubby saw that there were more, he bought them all. They’re actually well priced, less than $10 each on Amazon, and since we would’ve ended up buying them anyway, I agreed.

She was excited when I told her there was a package for her at the front door. Her excitement levels hit the roof when she opened the box up. Even without me telling her, she knew they were school books for her. We immediately sat down and began working on the Alphabet. I will admit that I was immediately impressed with both her skills and the workbook. I even told Ade I wish I had known about them when he was younger because we would’ve gotten them a lot sooner for him. The ABC Fun focuses more on identifying the letters than the previous workbook from Target that I had bought for him.

Since then, we’ve changed our schedule just a little bit. While Isbe finishes her nap (she usually sleeps longer than Ade), I work with Ade on his school work. Isbe is usually awake by the time I’m done with Ade so we do something all together, either reading a book or doing an art lesson, along with reading their Devotional. Then Isbe and I sit together at the craft table (really the coffee table I grew up with) and do 2-4 pages out of her workbook. Because she is still young and likes to pretend to read, I’ve been focusing mainly on the ABC Fun workbook. She also asks for the “purple one” more, too.

We still do the things we did before. She still gets out her coloring pages if I’m busy with Ade when she wakes up. She still brings books up to me throughout the day and asks me to read them to her. She still holds up a marker or colored pencil and tries to identify the color. Now, though, we have a little more structure for her to learn with.

What did you first start teaching your child and how? If you have more than one child, do you find the younger one interested in learning, too? Do you feel cultivating a learning environment is important?